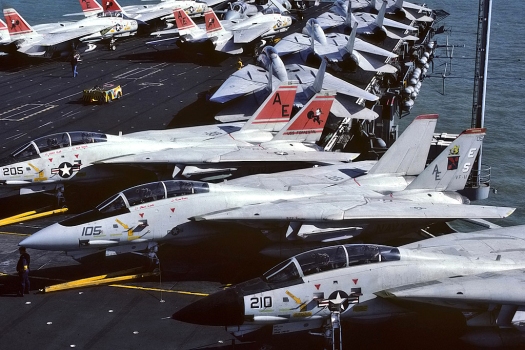 Following the destruction of the Victor II late on the previous night, Strike Fleet Atlantic’s commander (COMSTRIKFLTLANT) ordered a course change for Task Force 21.3. The carrier battlegroups that made up the task force turned southwest on a modified reverse course, hurriedly putting as much distance between the wreckage of the Victor II and the two flattops as possible. The move made complete sense. It would only be a matter of time before the Soviets saturated the area with reconnaissance aircraft, and additional attack subs. Another factor motivating Task Force 21.3’s movement was the upcoming RORSAT pass scheduled for 0100 local time.

The Soviets did not disappoint with their response. Northern Fleet doubled the number of Bears patrolling the eastern Norwegian Sea, and bolstered them with Il-38 Mays. Requests went from Severomorsk to NWTVD’s commander requesting fighter coverage for the lumbering Bears and Mays as they conducted their searches.  US F-14s were making their presence felt, and the Bear force especially was taking unexpectedly high losses. The front commander denied Northern Fleet’s request, explaining to Admiral Kapitanets that most of the front’s fighters and interceptors were already committed elsewhere for the next twelve to fifteen hours. Air defense of the Kola, and upcoming air operations over northern Norway took up the majority of available fighters. A sizeable force was also being held in reserve to escort the Soviet Naval Aviation and Long Range Aviation bombers south once the enemy carrier groups were found.

The morning became more frustrating when the signal from Kosmos 1871 was lost thirty minutes before its 0100 pass. The satellite’s radar and cameras were unresponsive, and the efforts of engineers on the ground had no effect. The satellite remained in low earth orbit, but was essentially useless. As it passed over the Norwegian Sea, 1871 was as silent as a tomb. No data was transmitted back to Moscow.

Through the next five hours, Soviet efforts to find the carriers were ineffective. In the eastern Norwegian Sea, Tomcats from Kitty Hawk, working with the carrier’s E-2C Hawkeyes, and EA-6B Prowlers had set up a pair of simple, yet clever Bear traps that cost the Soviets four aircraft by dawn, and kept them guessing…wrongly….about the present location of Task Force 21.3. Farther west, Task Force 20.5 remained concealed. Eisenhower, and Forrestal launched no aircraft. US Air Force F-15s conducted patrols around the task force, while an E-3 Sentry out of Keflavik kept watch on the surrounding airspace. COMSTRIKFLTLANT’s intention was to keep this carrier task force sheathed until it was time for airstrikes against the Kola to start.

P-3s from Iceland were also out hunting for Soviet subs, and searching for the Baku/Kirov group. Locating the powerful, anti-carrier force became a higher priority. If it was heading south in the general direction of either NATO task force, a major effort would have to be made against it. The search was coming up empty as 0600 approached. Aboard Mount Whitney, Strike Fleet Atlantic’s battle staff was concerned the Soviet group might’ve somehow slipped by the Orions and submarines out ahead of the carrier groups. Additional P-3s were requested from Keflavik, and the idea of committing some of Eisenhower and Forrestal’s S-3 Vikings to the search was being hotly debated. Doing so would’ve put the carriers in greater danger of being detected and for little return. Northern Fleet had ordered the Baku/Kirov group back north to a position off the North Cape to serve as a protective barrier for the Barents Sea.

In the great scheme of things, the Baku/Kirov group now grew less significant after 0600. With flights of Soviet MiG-23s then bearing down on northern Norway, and search efforts to find Task Force 21.3 increasing, the focus of the next twelve hours was shifting to the waters of the eastern Norwegian Sea, and the airspace above it.