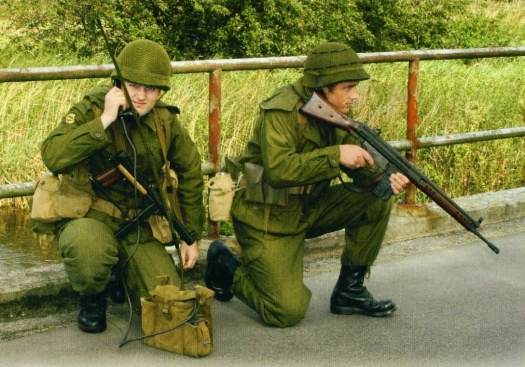 The 174th Panzer Battalion succeeded in holding the Soviet 80th tank regiment long enough for the remainder of its parent brigade to disengage and fall back in good order through friendly lines. The 174th then followed suit, and the battle was finally handed off to the 16th Panzergrenadier Brigade. The fighting that ran through the morning and deep into the afternoon had pushed NATO forces back almost eight kilometers. Schleswig Air Base was now in enemy hands though most of the helicopter squadrons based there had managed to escape before the base was overrun by Soviet tanks.

Unfortunately for Colonel-General Korbutov, the 6th Guards Motor Rifle Division had to reorganize, and resupply before it could resume offensive operations. Its success during the day was greatly due to the feats of its tank regiment. Two of the division’s motor rifle regiments that were involved in much of the day’s action had taken heavy losses in men and material. These formations weren’t combat ineffective by any stretch of the imagination, yet both needed time.

In the west, the Poles facing their own problems. The push against the Jutland Division netted little solid gain. The Danish main defensive positions had been encountered, and identified, but the effort had sapped the Polish 8th Mechanized Division of much of its combat power. For the remaining daylight hours of D+3 Korbutov ordered the Poles to rest and replenish. Once darkness fell, he instructed the 8th Mechanized Division’s commander to begin aggressive probing to find a weak point in the Danish defenses. Korbutov intended to commit the second Polish division early on D+4 in concert with a renewed push against the West German by the 6th Guards. He wanted to bring the OMG into play sometime in the next eighteen hours or so and have Schleswig-Holstein entirely under Warsaw Pact control in twenty-four.

At 0900 hours on D+3 a full squadron of USAF F-16s, and one of RAF Tornadoes were on the ground and operating from Danish airfields, fifteen hours ahead of schedule. With control of the air over Denmark and the Baltic area in question, NATO was placing a high priority on the movement of air reinforcements to the region. A third reinforcement squadron, this one of RAF Phantoms, was expected to begin arriving later in the day and be prepared to join operations by D+4. On the heels of this squadron were two more, both US Air Force, which would arrive in three days.

Also being shipped in were SAM units to help bolster air defense. The first of three US I-HAWK batteries had arrived and the British were deploying Rapiers to the airbases that RAF fighters would use. The Danish air defense system also needed replacements for the losses it suffered. Sadly, there were few uncommitted SAM batteries and radars available on the continent. SACEUR was pushing for US Army Reserve, and National Guard air defense units in the US to be flown to Denmark with their equipment as soon as possible. Until that happened, BALTAP had to make do with what was available.

All of this, of course, was dependent upon who physically controlled NATO airbases on the Jutland peninsula through the week. The fighting in Schleswig-Holstein was moving closer and closer to the Danish border. In spite of LANDJUT’s optimistic assurances, COMAIRBALTAP anticipated the next phase of Warsaw Pact operations would be an advance into Jutland preceded by airborne landings against his airfields. With the loss of most NATO airfields in Schleswig-Holstein, the bases in Jutland were even more critical. With the current force of fighters, as well as incoming reinforcements, COMAIRBALTAP was confident he’d make the Soviets pay a high price if they tried to drop paratroopers onto his airbases.